Where is our train? 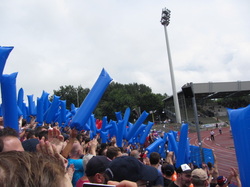 Every time I am on the continent now I ask to watch one team, I have interests in others but not to the same extent. Even I am shocked by how much I have taken to this team from Krefeld. The day of the fixture release I rummaged through to get an idea of what games I may be able to make. Too much joy we had a blank Saturday for the opening game in Wattenscheid.

Before long we were on the train for what should have been a relatively straightforward journey. A relatively straightforward journey it was for the first leg, made better by the Dutch rail service providing free Wi-Fi on trains, however we encountered a problem when we arrived in Venlo. We were greeted with the news that the international train had been cancelled which left one of two options; wait an hour for the next one, or get on the bus. Get on the bus we did, packed in like sardines, and prayed that we'd make our connection in Viersen. Of course we didn't, although we couldn't grumble as a slight delay if the train was running normally would have meant missing it such is the tightness. Now we had no idea what train to get so jumped on the one to Duisburg and hoped for the best. What resulted was us aimlessly wandering around as not a single train was showing as going to Wattenscheid, a last minute decision to hop on the next train that showed as going towards Bochum. After another bit of aimless wandering in Essen we finally found someone that could confirm we were on the right train, and around 1 hour and 45 minutes after we were due to arrive we were stood waiting for the bus outside Wattenscheid Hbf.

As the bus pulled up outside the ground we were surprised somewhat relieved that we'd avoided the torrential downpour that it looked like the majority of people had received. We had decided to stand on the terrace, a stroke of luck at last in that the nice person at the turnstile gave us a family ticket, coming to 14eu and we would be roasting for the rest of the afternoon. Indeed it was quite odd seeing people putting their shirts on the fences to dry. The Lohrheidestadion won't rank as the best ground I've ever visited, but it was still decent enough. The 16,000 capacity venue is predominantly dominated by terracing, with 3 side swooping round the athletics track. Behind the terrace on one side was a small seating area with the roof stretching over and providing some covered standing. The final side is a covered seating stand that I'd guesstimate at hold 2/3000. Despite the crowd being given at only 2,500, considering that we thought Uerdingen had around 1,200 in the away end. This turnout being so large that about 5 minutes into the game another pen had to be opened to allow others to get in.

On discussing the game we came to the conclusion that we were watching a team that would survive comfortably against a team that was going to struggle for most of the season, watch that change though! KFC continued from where they left off last season playing free flowing football that ended with a relatively comfortable 2-0 victory, both goals coming in the first half. It had been end to end for most of this half, the first goal coming in the fifteenth minute when a cross from the right was headed back across the keeper into the net by Emrah Uzun. KFC were given the opportunity to double their lead in the 40th minute when the goalie rushed out and bundled down Benjamin Baltes when he was through on goal. Up stepped Issa Issa from the spot and fired the ball away from the keeper to double the lead.

While there wasn't to be any goals in the second half, it can hardly be said that it was devoid of any action. Uerdingen would find themselves down to 10 men when Andreas Korte was dealt with a second yellow. This allowed the hosts into the game, who continued to press. They had numerous good chances, but thankfully Samulewicz in the visiting net was equal to them all to keep the score at 2-0 come the final whistle. It was a good win, celebrated by all, but there is some uncertainty about what is going to happen next. Upon arriving home, and recently confirmed in the match report, that the is a regionalliga ruling that you have to play a certain amount of U23 players in each match, which Uerdingen didn't match. Therefore we are waiting as to watch punishment they'll receive.

After the game everyone getting the train to Krefeld were placed on buses outside the away end and got a police escort back to the station, this meant we didn't have to walk far! At the station we bumped into Kenny (Adventures in Tinpot) and Stoffers (EFW) who we got talking to, and just as well as we were about to get on the wrong train, again, instead we were directed to the right one and the journey home was a lot smoother with the trains running properly. At Venlo we said our goodbyes as they went off to watch VVV v Eupen as we got the train home. Despite the topsy-turvy start it'd been a very good day. 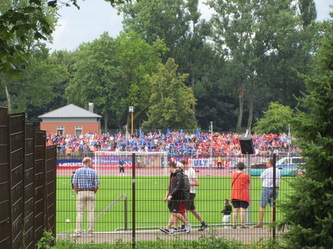 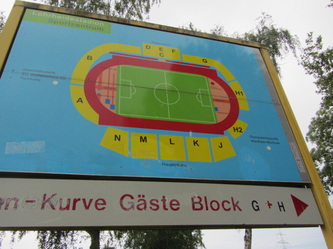 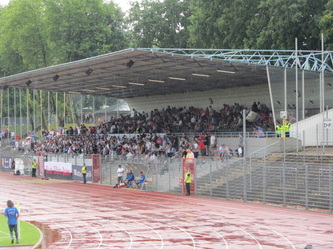 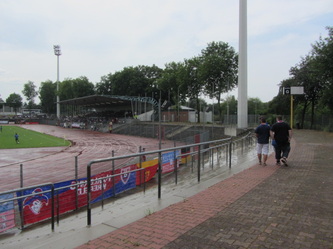 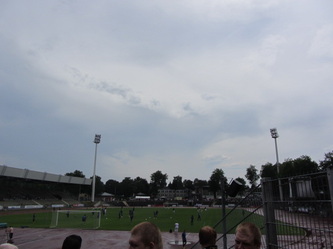 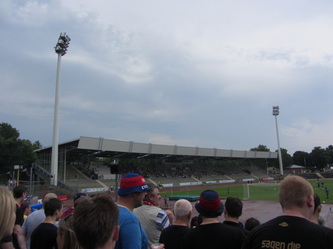 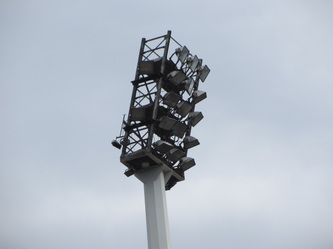 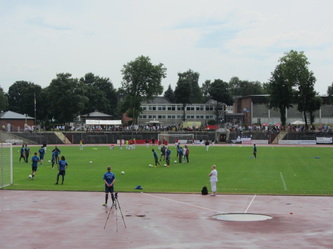 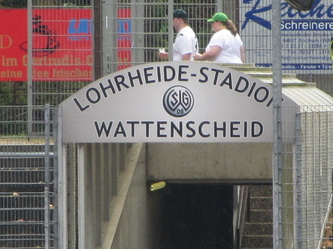 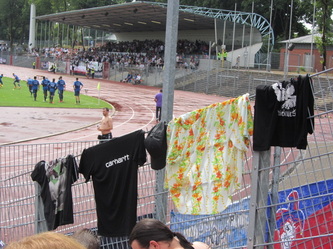 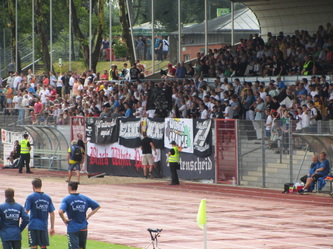 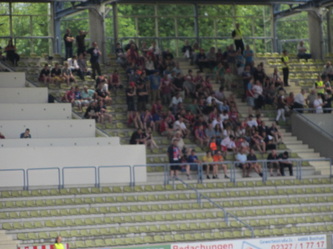 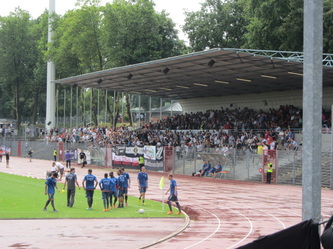 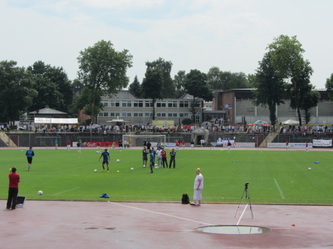 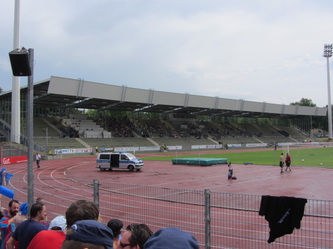 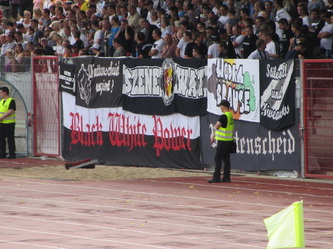 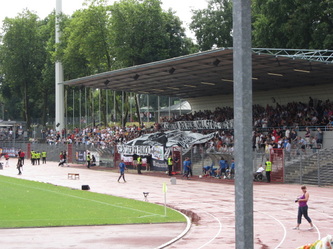 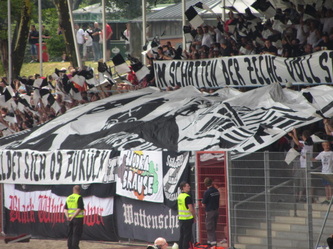 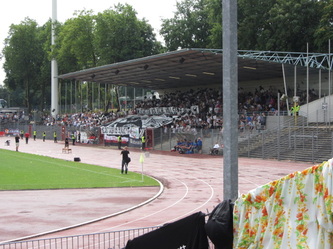 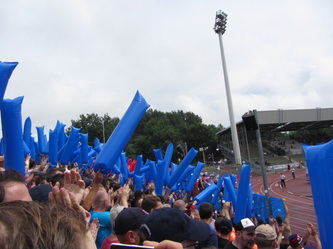 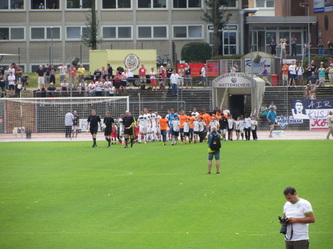 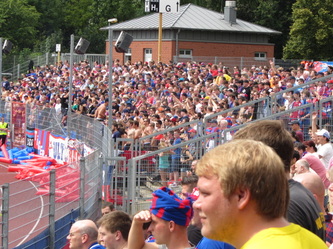 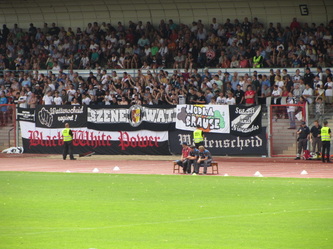