For a stadium that was only in existence for 34 years, this has certainly had more than its fair share of big matches, tenants and controversy.
Built in the period November 1972 to October 1976, this 80,242 concrete bowl has hosted NFL, College football, MLS, NASL, World cup, USFL, XFL, bowl games, Pink Floyd, Springsteen, The Pope....and on and on.
It had not one, but two NFL teams, neither of which have their roots (or indeed their name!) in New Jersey. The New York Football Giants moved in when the stadium opened and were the main leaseholders. Under the terms of that lease the name of the stadium (Giants Stadium) would only be changed with their approval. As this was never forthcoming, the New York Jets (who moved here from Shea Stadium in 1984) and slightly upset at playing in a stadium with their rivals name in it, starting referring to it as 'The Meadowlands', but eventually gave up.
And so for over a quarter of a century the New York Jets played their home games at 'Giants Stadium, New Jersey'. But as you will see below, they literally had the last laugh.
The Jets also had to overcome the fact that, as the stadium was built for the Giants, the predominant colour was blue. As a result, they hung green banners over the walls and gates every time they played there.
As the only dual NFL occupancy stadium it now hold the record for hosting the most NFL games.
From a football perspective it was the home of the New York Cosmos and the venue where Pele played his last game. It hosted 7 games of the 1994 World Cup, including a semi final. It was also the venue in 2005 that witnessed the England debut of Peter Crouch!!!
I visited 25 October 1998 for the Jets 28-3 win over the Atlanta Falcons who played two back up quarter backs and were never a match for the home side who went on to lose the AFC Championship in Denver. The attendance was officially given as 71,573. 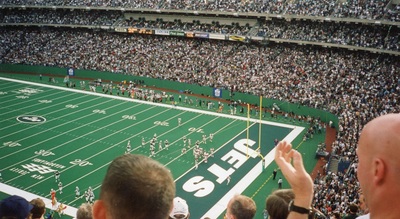 The stadium was lacking any real character and the facilities were nothing special. although you could get wonderful views of the Manhattan Skyline. Looking back it should be no surprised that it's day were eventually numbered (34 years in not a long time for a stadium), especially given the city it represents. In 2007 work started on the new Met Life Stadium with all it's whistles and bells (and a rail link to Penn Station - prior to that public transport from Manhattan was limited to buses from the Port Authority).
But to demonstrate how much things have changed since $78m ($320m current day equivalent) was spent on Giants Stadium, take a look at this photo. 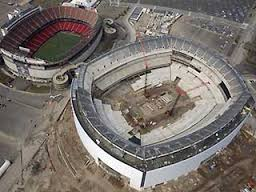 To the left is the 80,000 capacity Giants stadium. To the right is the partially constructed Met Life Stadium built at a cost of $1.6 billion, and seating a shade over 70,000. It really does show the increased expectations that people have regarding their sporting stadiums.
And so the old Giants Stadium was eventually demolished between Feb and Aug 2010 to make way for a car park. But even at the end it had a final couple of stings in the tail. Firstly, much to the disappointment of those who love a good urban legend, no human remains were found under section 107, so the search for Teamster Boss Jimmy Hoffa's remains may need to now go elsewhere.
But probably most ironically of all, this famous stadium closed its door for the last time 3 January 2010 following the last ever NFL game to be held there between the visiting Cincinnati Bengals and the hosts.....the New York Jets. This means that the record books will for ever show that the tenants for Giants Stadium read:
New York Giants..................... 1976 to 2009;
New York Jets......................... 1984 to 2010.
I guess the old place wouldn't have had it any other way.