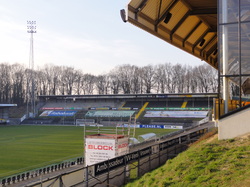 For one third of us, The Netherlands and all it's wonderful quirks is now home. Based on the Football Ground Guide Message board, it is apparent that my adopted country still ranks highly in places to visit for a football weekend. After 3 years here I really struggle to see why from a ground hopping perspective. Yes, there are some interesting stadia to see, but the need to design stadia to meet the appalling holiganism problems of the late 80's and early 90's coupled with the Dutch readiness to knock down the past and build something new in the name of progress, has meant that many clubs at all levels now sit in new homes.
Unfortunately many of these new homes are box stadia, invariably with raised stands resulting in either moats (with access to toilets and catering) or pitches surrounded by walls (as taken to the extreme in Zwolle - below).
Lower down the pyramid the general trend is towards a small stand on one side with a few step of terracing around the other 3 sides (sometimes covered in places). I must admit to feelings of Deja Vue at some grounds.
Ere Divisie games can present some challenges in tickets (my local team NAC is one of the biggest culprits in limiting access to them) but normally an e-mail in advance will generate a positive response, most clubs are well used to request from Englishmen for tickets.
That said there are many plus points and travelling around the country is very simple. There are some memorable grounds and stands, some that have been well renovated and other that have not.
Unlike neighbouring Belgium there are plenty of Saturday afternoon kick offs in the lower leagues and the staggered kick off times over the week end and small distances means that a weekend of games on Friday, Saturday afternoon, Saturday Evening, Sunday and Monday is possible on a fairly regular basis (with or withour a detiur into Germany or Belgium!).
In general smoking is still allowed in the stadiums and beer can be consumed at your seat (although there are some fairly odd restrictions in Topklasse and Den Bosch!!!). Food is nearly always limited to croquette/sausage in a roll, although it is only right to give an honourable mention to the hot ham sandwich at Twente (see below). In the Ere Divisie food and drinks are nearly always bought using tokens that you purchase away from the bars (as is the case in Belgium).
One word of warning...away travel. Don't expect to turn up at a game and be able to go in with the away supporters. Away fan regulations are very strict and involve either compulsory bus travel or collection of tickets at a motorway station on route to the ground. As a result, away support on the whole is very low by English and German standards, to the detriment of the overall atmosphere in the ground.
Hopefully our pictures will give you a feel for the stadia and, maybe help in deciding which games to go to 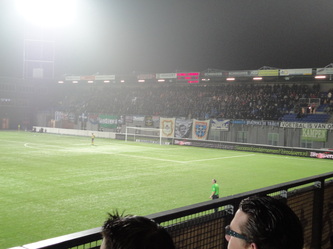 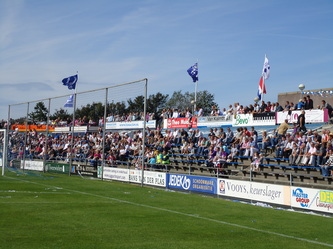 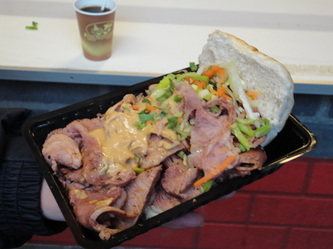