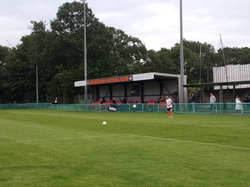 Having kids can be a blessing sometimes.  Having two boys can sometimes help even more.  On 7th August it did.  The eldest had his mates round for his birthday and as a result he didn't want his younger brother in the house.  I was told I 'must' take him out for the evening.....we were out of the door and up the A2 quicker than Usain Bolt at Stratford.  Early season fever had gripped the household with local team Deal Town making a fantastic start to the season the Saturday before (5-1 win at home) with me and the youngest desparate to see this continue and also to watch football (any football) on the warm, balmy East Kent summer evenings.

Everything soon came to an abrupt halt.  I completely forgotten that this was a) nothing but early season enthusiasm that we fall for every year, b) non league footy (where teams are about as reliable as an Alfa Romeo) and c) I was on my way towards Medway and will be driving too close for my liking to Gillingham.  To Lordswood ground's credit, it is a nice neat ground and perfectly suited at this level.  Easy to find (and close to the M2 for a quick getaway back to the safety of East Kent) and plenty of parking.

Despite this the abrupt halt still happened. The beautiful East Kent evening sun disappeared as the Medway towns got nearer and was eventually replaced by a few massive downpours and equally massive drop in temperature.  Deal were poor and beaten by a team that simply had to put the ball over the slow centre half and run at goal.  Medway remains my least favourite place in Kent and as if not to let me down one of the local residents embarrased himself all evening by showing an incredible lack of knowledge of the laws of the game and demonstrated it by frequently shouting out utter rubbish at regular intervals. Turns out he was a Lordswood club official.  Got to love Medway. 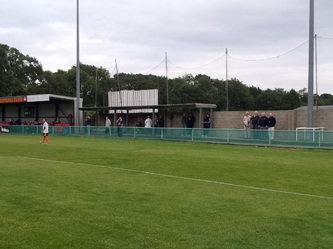 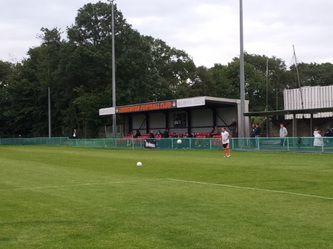 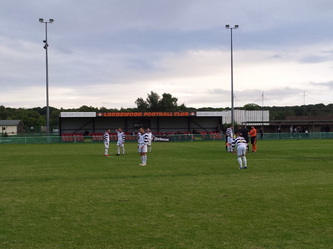 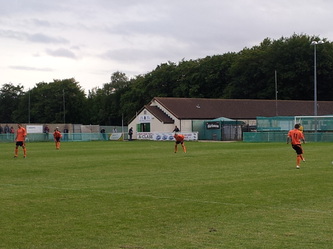