This was to be my first Football League game of the season as I made the short journey to Griffin Park for a league clash in front of the Sky cameras. Normally I wouldn't have paid much attention to the game, but a Friday night game for £5  at one of my favourite grounds is too much for me to turn down. If I had have got my act together and booked in advance it would've been £1. Getting to Brentford is easy for myself, and surprisingly takes less time than it does for me to get to Aldershot, so I arrived with plenty of time. Wandering the back streets, Griffin Park presents that 'old school' feel. Crowds flocking, with the floodlights looming above chimney's.

The feel continues to the turnstiles, where they're hidden amongst the row of houses. This is great for building the atmosphere, but when you're a neutral and unfamiliar with the place it's a pain. I've been to GP about 25+ (I'd guess) times due to Broncos formerly calling it home, and Aldershot playing the Bees in recent times, but to my knowledge have never stood on the Ealing Road terrace. I asked someone queuing "is this for the terrace mate?' His reply was "No, it's for the standing." I kept my mouth shut, but deep down, I wanted to call him an idiot. In I went for a new look at the ground.

Opened in 1904, the ground is most famous for it's four pubs on each corner, but it's popular amongst most football fans. I was to be stood in a packed Ealing Road Terrace. When I first game to the ground this was uncovered, but in 2007 a roof was placed over the top. As with the Terrace at Wakefield, it has made it seem a lot bigger than when uncovered. To our left was The Bees United Stand, one that I've always been intrigued by. All seated, it's split into an upper and lower tier, where seats have been put on what I presume is a terrace. In either corner it begins to curve round, suggesting there were plans at one point to mimic it around the ground. From memory leg room in there is extremely tight. Opposite us is the Brook Road Stand, used for away stands. Replacing a great looking terrace it's a two tiered monstrosity. The upper portion seating, the lower terracing. The final side, the Bill Axeby stand, is a larger version of the stand along the side at Halifax. It's all seated with numerous pillars.

Prior to the game starting, and when the players game out, Brentford fans held numerous signs in support of a move to nearby Lionel Road. A move, because I love GP, I don't want to support. Saying that, I guess it's progress. I watched the initial few minutes under the floodlight where I bumped into Joris (Doingthe116) whom I had a brief chat, before Harrison, a college mate, came and found me. Him and his two mates who support the Bees, dragged me into the heart of the Terrace from where I'd watch the match. A match in which Brentford were extremely fortunate to get 3 points, with the Gills missing numerous sitters. In the end it'd be a Trotta penalty that would gift the home side 3 points and put them top.

After the game I bumped into some more people I knew through College and Pete a Bournemouth fan I know. Missing my train I had to stand and watch the two sets of fans engage in some quite cringeworthy 'banter.' Despite this it'd been an enjoyable evening for the price, but I will be sticking to Non-League for the most part until the end of the season in England.  Saying that, I really hope Brentford get promoted. 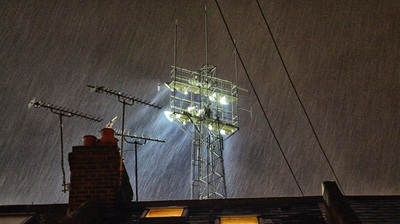 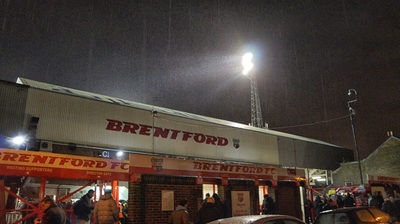 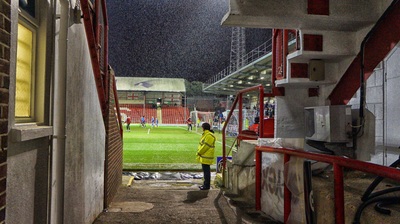 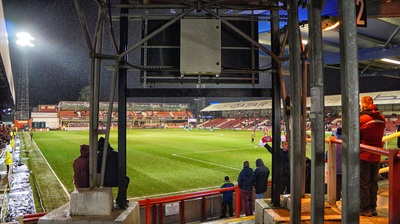 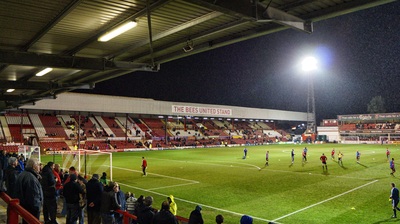 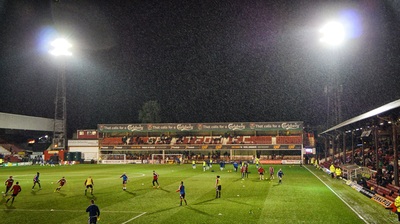 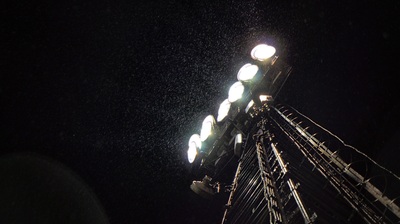 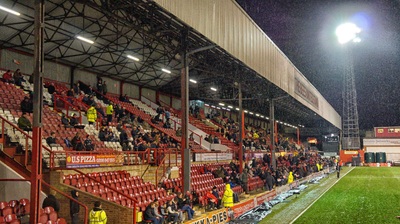 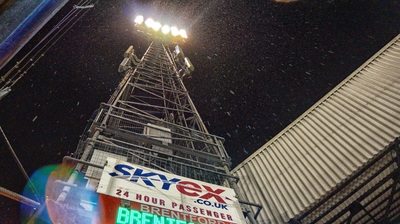 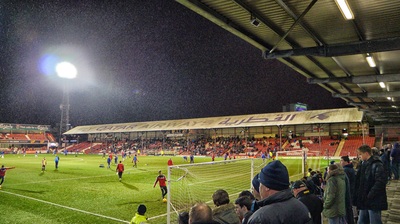 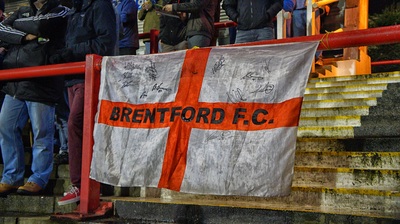 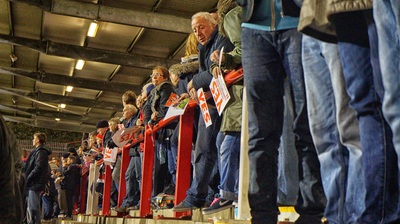 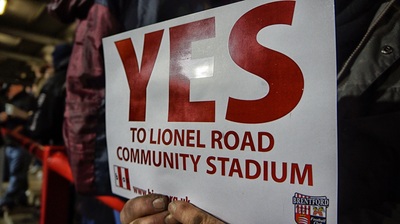 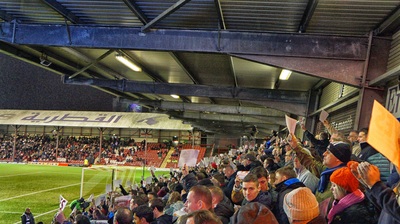 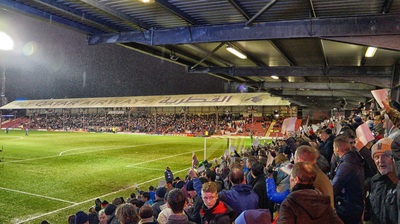 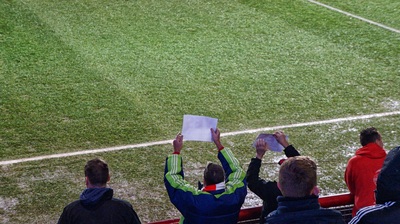 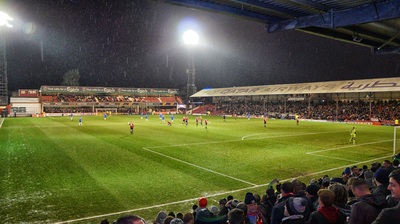 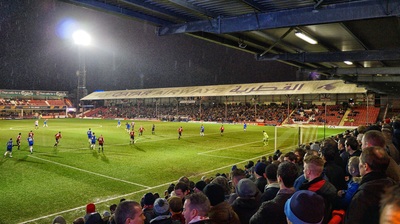 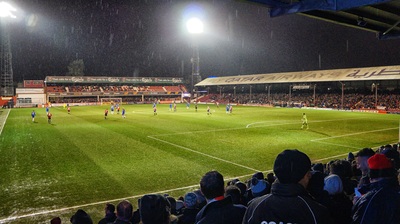 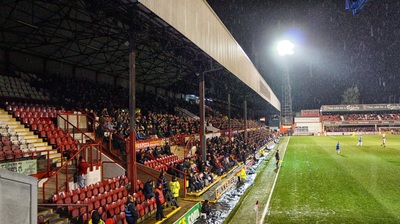 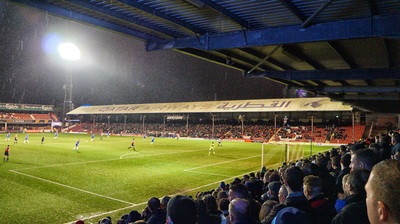 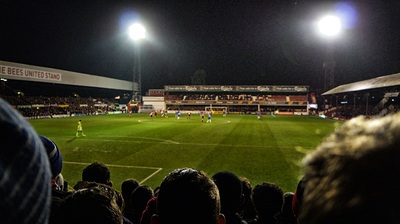 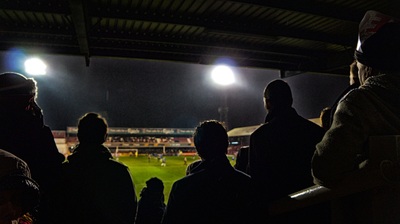 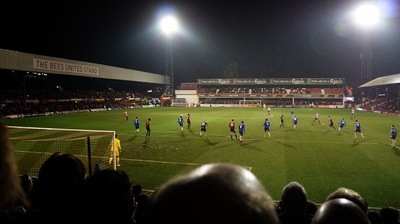 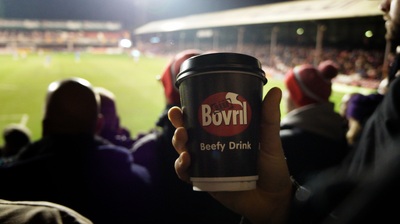