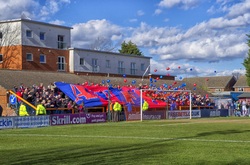 At least one member of PDM had been present at the previous five 'Tour of Duty' games. This was to be my 5th 'Tour', having only missed out on a trip to Port Vale in its Second year. For those sat wondering 'what on earth is he talking about?' (some things never change, eh?) I'll explain the very simple concept to you. The Tour Of Duty inaugurated in Grimsby when a supporters group, The RBA, made a push to get as many people as possible to go. Since then it has been repeated each season, going to; Port Vale, Northampton, Burton and Rochdale. Number 6, as you've probably guessed took place in Braintree.

Braintree is probably most famous for....well, I'm not sure. It's a place that I've often omitted from my desire to go to a football game. A shock to some, given that 'The Iron' are likely to leave the ground in the next few years and that it really isn't that difficult to get to. My excuse is rubbish, I simply thought I'd been before. When I found at this wasn't true, I immediately booked my train ticket and counted down the days for my return to Essex.

Prior to the past few weeks I've had no issue with the Capital of our fair nation, but recently I've realised why some refer to it by the affectionate name 'Scumdon.' The people are annoying, and it's a bit of a dump. On the Tube from Waterloo I had two people opposite loudly discussing the Premier League and the English Football team. Normally I wouldn't have an issue with this, but they were spouting complete and utter tosh. I tried to resist myself from laughing at the point when one, after saying he supported Arsenal (Or Man Utd, I wasn't sure), went on to claim he supported QPR. The same can't be said for the random bloke stood next to him, who had to bury his head in his partner's shoulder to stop laughing. To top it all off he was on his way to the West Ham game wearing a suit, with an accent similar to Jack Whitehall.

After leaving my two acquaintances to talk more rubbish it was onwards I went. Only when you've sampled the delights of Forest Gate, Ilford and Romford you can say you've seen the real London. Unfortunately my train from Stratford went through all these place. Stratford in itself ranks fairly low on my 'must visit' list, with the shininess of the Olympic Park already wearing to reveal the true grimness that the capital has to offer. Before long, however, the train was speeding through the Essex countryside and up towards Braintree. Jumping off at Braintree Freeport I dodged the Saturday shoppers, a blind lady walking straight to me and an old dear that had an inability to walk in a straight line. A wrong turn down an alley later I'd bump into everyone getting of the 'Trust bus.' Saying Hello, I did a lap of the exterior of the ground before parting with my admission money of £5.

If someone were to ask me to describe Cressing Road to them, I'd say it was a cross of Carshalton's main-stand, the old terrace at Underhill and Southport's away end. Opened by the Fourth annual Crittall Sports and Show (no less) in 1923 it has a capacity of a little over 4,000. While I understand clubs want to move to a new ground for added revenue, to my untrained commercial eye Braintree could maintain Cressing Road for the long run. Either end are uncovered terraces, with about 6 steps. Behind one of these is the clubhouse, and the other a mass of empty space which could potentially be developed. Along one side is a small covered terrace and the opposite side a seated stand running a third of the pitch with seating for 553.

Having done my lap of the pitch (I love un-segregated games) I made my way into the small club shop in the corner, failing to notice the programme shop behind the goal, purchased a badge and awaited kick off. For whatever reason, the Ultras scene hasn't been embraced in England to the extent of virtually every single country the world over, but in Aldershot we have a pretty good crack at it. As such my (Bias) opinion is that the group 'Phoenix Supras' is certainly one of the better in the country. Regularly our support gets plaudits for the noise and displays they put on, and as such it's one of the few highlights this season. After realising I have an inability to tie balloons, I headed to one side to get a photo of the display that had been created for this match. A simple Red/Blue surfer with 'ATFC' written upon it accompanied with an amass of balloons. A couple of snaps later I rejoined everyone on the terrace as the inevitable happened.

3 minutes into the game Holman poked the ball into the net and put the home side ahead. From here the game was flat, dull and depressing. Aldershot offered very little and there were about 4 more shots during the rest of the game. 3 from Braintree, including one that rifled the crossbar. Thankfully in the stands the Aldershot contingent were loud for the majority making a poor game bearable. Largely, it was a case of 'same old, same old.' Watching The Shots at the moment is sort of like watching your ageing dog. It's painful to watch, but you try to tell yourself things will get better, but deep down you know the inevitable will happen.

With Full Time upon us, I had to rescue the surfer from the back of the stand (turns out there was a small gap between that and the club house). A brief wait later, we were on the train back to the Capital. Another day of the action on the pitch spoiling a decent day off it, but I guess that's what to expect when supporting a team in the fifth division. Come to think of it, any team! 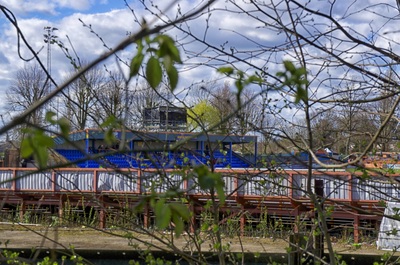 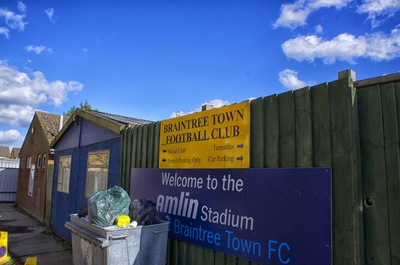 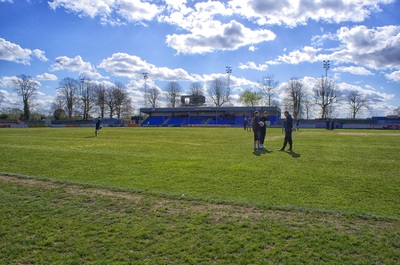 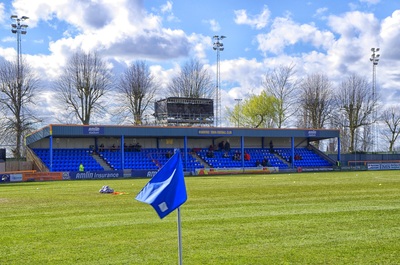 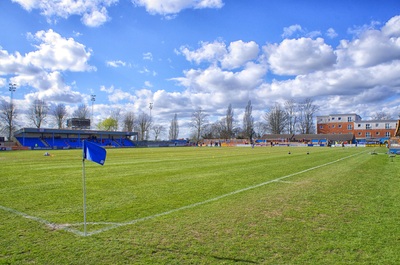 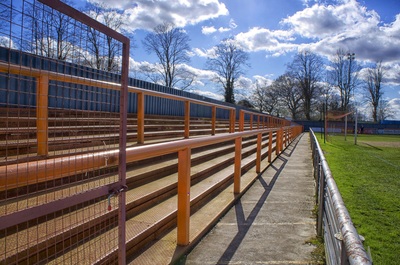 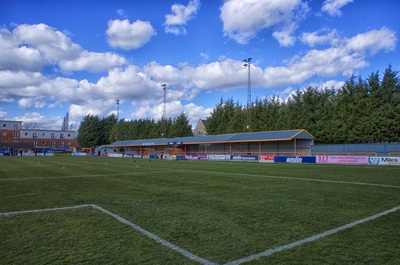 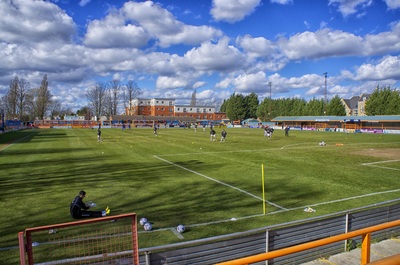 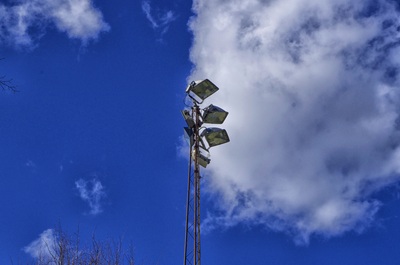 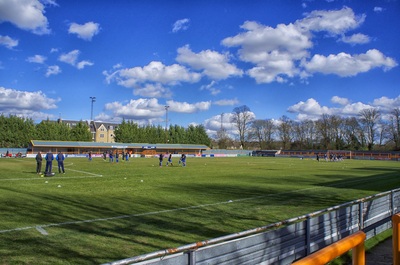 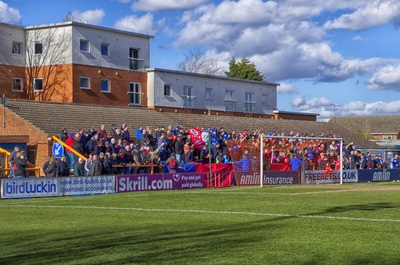 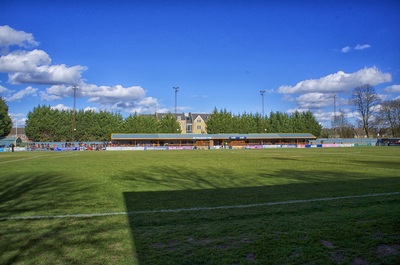 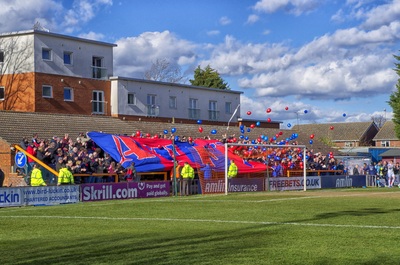 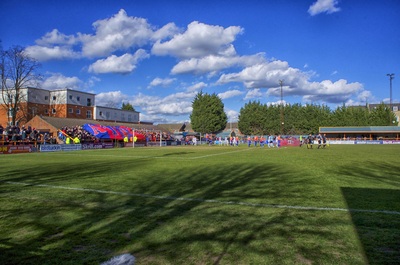 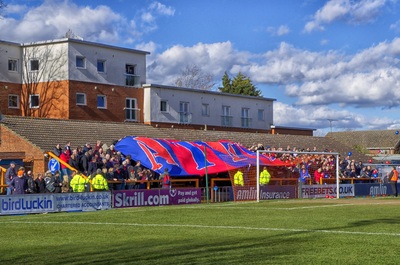 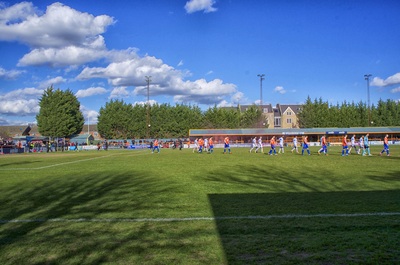 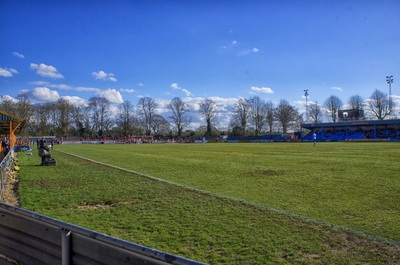 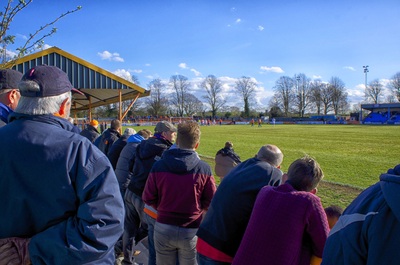 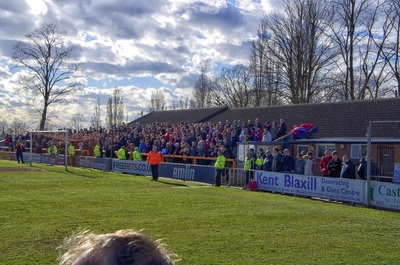 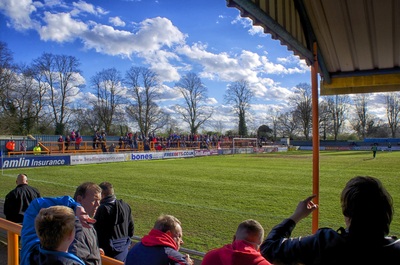