The equivalent of a history essay

Monday night proved to be sparse in terms of fixtures so we decided to make the journey north to the smallest ground in professional football, holding a mere 3,000. Almere itself has the honour of being the youngest city in the Netherlands. The land that the city was built on was originally planned for agriculture but after WWII housing was needed to deal with the increasing population within Amsterdam. The first house in Almere was completed in 1976. Almere FC can be traced to a merger of 3 teams in 1972. DWS, Volewijckers and Blauw-Wit to form FC Amsterdam, DWS were angered by this with the fans forming their own club. De Zwarte Schapen (DZS). In 1978 they merged with AVV Argonaut to form Argonaut Zwarte Schapen (AVS). Between 1988-1972 they were called FC Sloterplas. By 1996 they were playing in Almere under the name of Sporting flevoland, changed to FC Omniworld in 1997. In 2005 the Mitsubishi Forklift Stadium opened allowing professional football to be held within the city for the first time, losing 2-0 to FC Eindhoven. Since then Omniworld/Almere have struggled in the Jupiler League, their highest place finish came in 2007/8 when they came 13th.

There are two decent sized car parks serving the ground, the further of the two being a couple of minutes walk from the main entrance. Unfortunately as we parked up I realised that I'd somehow forgotten to pick up a single camera, so it was back to my phone for some photos.  3 sides of the ground seem older than 7 years, although I believe the large amount of poles could be the reason for this. The entrance for home fans is a single turnstile behind a structure that looked very much like a car showroom, from what we could work out this was the club bar, but we didn't make any effort to go inside. Next to this was the executive area, extended fairly recently judging by old photo's. This didn't seem to fit in with the rest of the ground appearing too modern. But it was pretty smart and we couldn't help but want one for the high street end at Aldershot! We chose to sit in the stand opposite the camera, although we were lucky to get in at all as the guy doing the turnstile seemed so confused by the price for the 3 of us. He asked for 32 euros, got distracted, then said it would be 52 euros before using his calculator to get to 31 euros. All very strange. Anyway, the stand we were in was elevated about a foot above the ground, and had about 25 poles in front of it, despite this the view was pretty good from our seat, although we were sat underneath the one heater that was broken! The stand behind the goal was of a similar design and split between home and away fans. Opposite us was a stand that reminded me of one end at Eastleigh, two blocks of seats split by an unnecessary gap. This, again, had lots of poles in front of it. The ground was completed by no fewer than 12 floodlights. 7 on one side of the pitch and 5 on the other.

With all four away fans braced and ready for action it would be their team that opened the scoring against the team bottom of the league in the 19th minute. A cross from the right bouncing off the back of the almere defender. What followed next was possibly the greatest thing.I have ever seen. All four veendam supporters bouncing with the arms up without a noise coming from their mouths, honestly my laughter was louder. In truth their lack of noise seemed to symbol the mood of the ground filled mostly with families bored senseless as the rain came in off the north sea. Even "ultras almere" failed to live up to the expectancy of creating at least some noise during the first half, save for the occasional half added chant. There was some excitement in the 30th minute as the away support literally doubled. People watching on the TV can be forgiven if they'd turned over by halftime  as the lack of quality on show could be proven by the fact that I could've scored some of the chances presented. Those of you reading that know me will know I am atrocious at football. Last year I mustered up 1 goal. I played as a striker all season with the goal coming off my stomach from 2 yards out. Half time came around and as you can guess the score was still, 1-0.

During half time the away crowd swarmed to new highs. 12. Oh and the lone fan wandering around the home end. The boredom that ensued in the second half allowed us to calculate that the away end holds 352 meaning that it was 3% full for this game. There was a brief moment of excitement in the 55th minute when a veendam player was issued with a yellow card. Almere somehow scored in the 62nd minute when number 10 found space and on the angle fired the ball THROUGH the goal keeper. The cheers were slightly louder this time. Almere went close again in the 70th minute when a volley from 20 yards went narrowly wide of the right hand post.  The game then livened up a bit in the 70th minute as a veendam player took offence to something and started a scramble just outside veendams box. Yellow cards were handed out to the main instigators. The resulting free kick came to nothing, although a shot shortly afterwards came close. Veendam regained the lead in the 76th minute, to more muted cheers, with a move the game had been lacking. Nice passing build up found schmeltz in space in the area to fire across the keeper into the bottom right and corner. Veendam scored again in the 86th minute with a long ball from the left finding number 3 with his back to goal to loop a header over the goalie.

We made our way back to the car somehow avoiding the downpour that had started in the second half. The journey back was fairly uneventful. 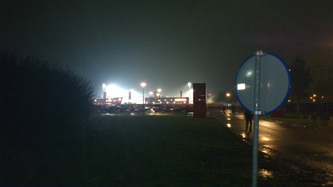 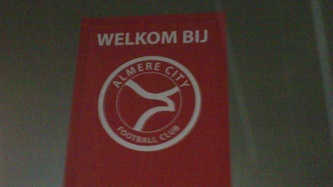 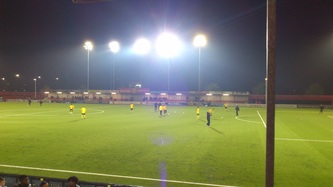 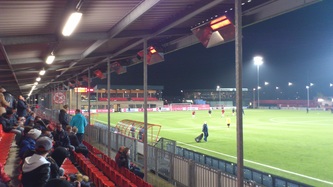 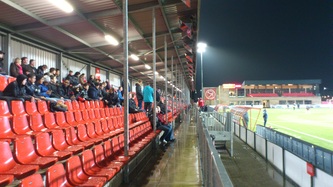 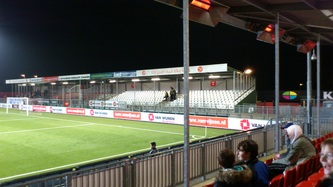 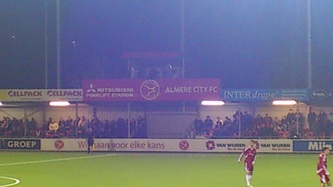 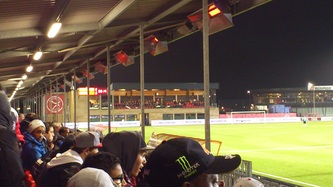 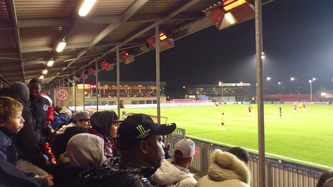 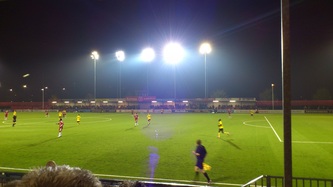 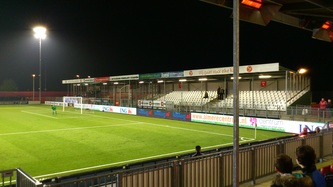 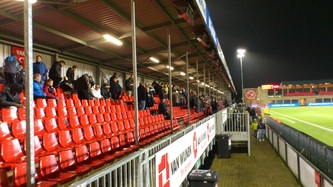 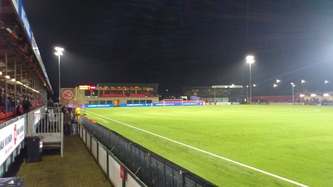 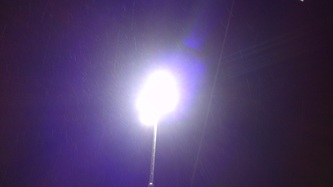 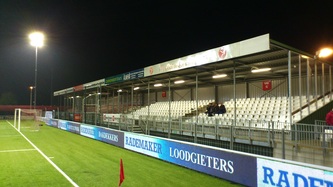 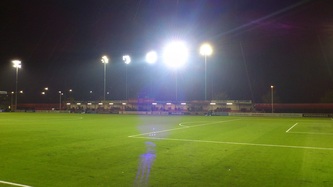 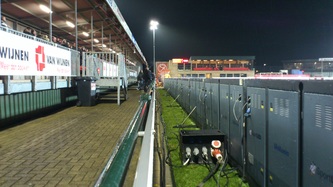 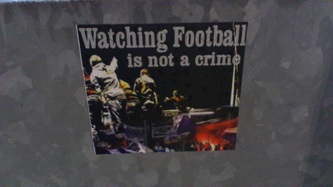 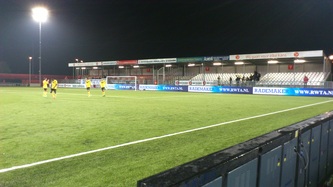 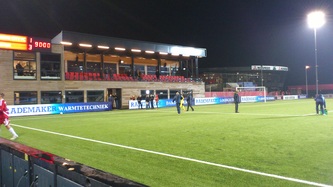 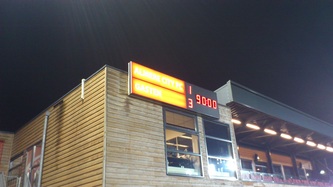 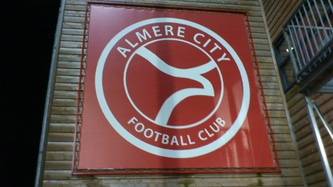 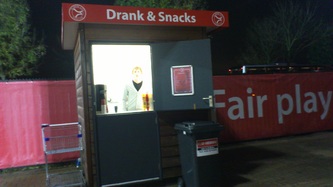 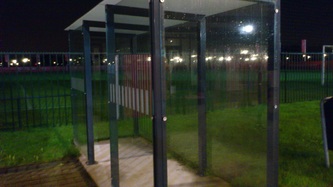 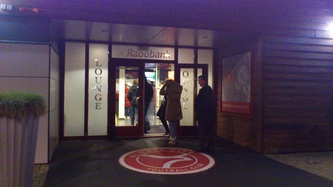 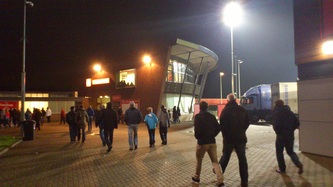